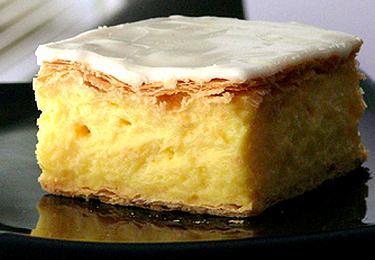 Home » The pressure of good publicity

The pressure of good publicity

A tale of woe to be sure… as they would have said in the old days.

A while ago my better half read a story in Epicure, in The Age, about “Australia’s Best Vanilla Slice”. It was purportedly served from the fish and chip shop in Flinders. For the uninitiated, Flinders is 96 kms from Melbourne and is not a trip for the faint hearted in search of Vanilla Slice greatness.

After an exceptional breakfast at Mario’s on Saturday the good wife and I decided we would make the trip. We had been on a bit of a vanilla slice thing and the promise of the best in Australia was too good to resist.

Clearly the publicity had done its job.

We took the drive down to Flinders and found the fish and chip shop, most notable from the enormous banner on the front saying “Australia’s Biggest and Best Vanilla Slice”. As we parked we noted that the shop was quite busy and felt happy about our journey in search of…

We walked in and ordered some fish and chips and sought out the vanilla slices and I must say that one of their claims was correct. It was the biggest. It stood about 15cm high and was what could only be called a slab at 40cm x 30cm. We ordered our slice to share and waited for the nice girl to carve it off for us. Our serve was about 10cmx10cm [x15cm tall].

We then headed down to the beach to have our highly anticipated lunch and dessert.

This was when the wheels fell off. The f&c’s were not promised to be anything spectacular, and they were exactly that, anything but spectacular. But we had our vanilla slice to come. We felt ebullient. It was horrible. My wife and I could only force two mouthfuls at most.

So how had this happened? How had a Melbourne foodie institution got it so wrong?

Does it matter? No.

What matters is that the product did not live up to the promise. This is an error that many businesses make when promoting and marketing their business. If the slice had have been not even great but good then we probably would have just passed it off to reviewers taste and moved on. But it was bad.

Now I know that Vanilla Slicery is a subjective topic at the best of times but I can assure you that the good wife and myself are what some would consider, well versed in the topic. We were promised Australia’s Best Vanilla Slice and that’s what we were expecting.

How often have you used a business that didn’t live up to the promise? What do you do afterwards? Most times we just don’t use them again. Sometimes we tell our friends, and they tell their friends. Word of mouth is a two way street. It can promote bad products and services as well or even better than good.

So be careful. Live up to the promise. Make sure what you put on your website and in your blog and on Facebook is not only true, but also attainable. It’s OK to walk before you can crawl.